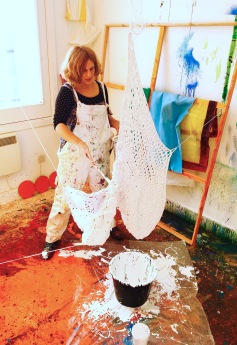 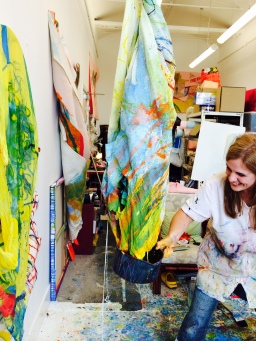 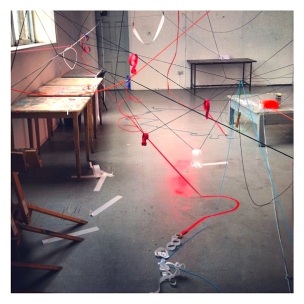 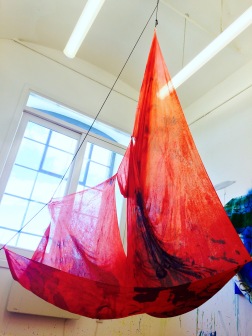 Louise Ritchie is an artist, lecturer and creative facilitator working in independent and collaborative contexts, embracing many processes and experimental pathways.  Recent exhibitions include ‘Un-Painting’ supported by the Dundee Visual Artists Award 2016; ‘Paint-Print-Paint’ in collaboration with Leena Namari 2016; a commission for large scale site specific work for the new City of Glasgow College campus, 2016 and, in 2015, was the Scottish artist representative at the 10th International Residential Print Symposium, Castle Mojmirovce, Slovakia. She has also led large scale national exhibitions annually both as past President of the SSA Society of Scottish Artists and as a member of the executive. In 2014-15 she co-curated exhibitions and co-edited two publications as part of an international arts network including `11:11 Nove Mosty / New Bridges‘ International Touring Exhibition in Slovakia, and the ‘60×60‘ traveling exhibition in Belgium, Slovakia, Japan, China, France, Netherlands, Czech Republic and numerous other venues.

Her practice examines a range of tangential explorations, overlaps and collaborations that articulate the process of creativity curiosity.  Multi faceted, contrary fascinations sweep broadly and loosely with a range of media spanning public art commissions, independent works, printmaking, performative and lens based works, to large format spatially situated paint-forms.  Each seek to encapsulate vivid gestural energy down to various levels of detail whether this is for large spatially complex painterly studies or the controlled micro levels within needle-point and pounce studies on paper.

A graduate of DJCAD, Dundee Louise is currently a lecturer on the BA (Hons) Contemporary Art Practice Programme at City of Glasgow College / UWS University of West of Scotland .  She is a former President of the SSA Society of Scottish Artists and has won several major awards including, most recently, the Dundee Visual Artist Award 2015.  Exhibiting widely in the UK and abroad including London, Bulgaria, China, Belgium and France, she has also co-created arts facilitation workshops for Angus Council as an Artist in Residence whilst her work is in several major collections including The Mirror Group, London and Dundee City Council.

Since 1993 Lousie has lectured in many of the leading Scottish art schools, including Duncan of Jordanstone (the top research art and design school in Scotland); the Glasgow School of Art (professional practice insights via SSA 1998), and Moray College / University of the Highland and Islands.

She was the invited external practice representative for the validation of the BA(Hons) Contemporary Art Practice programme between University of West of Scotland and Glasgow City Colleges and later taught on that programme.

Louise has won several prizes such as the Glasgow Art Club Fellowship, Millar Homes Paris Scholarship, Scottish Arts Club Award amongst others, and has co-designed -with local schools and commissioning bodies, a range of design and art interventions for Dundee City Council Education department and has been a regular artist contributor for the creative programmes at Museum of the University of St Andrews.

Louise is a professional member of the SAU,the Scottish Artists Union, a board member of ESSA, Exhibiting Societies of Scottish Artists, served on the Board of Trustees of Broughty Ferry Development Trust,and was awarded Honorary membership of the Scottish Arts Club, Edinburgh. Having recently graduated with a PgC TFE at University of Dundee, she is currently concluding a mentor training programme delivered by the Scottish Mentoring Network and Creative Scotland.

She was a lead researcher in the Trigger Research Network for ArtWorks Scotland: Developing Practice in Participatory Settings funded by the AHRC, Paul Hamlyn Foundation and Creative Scotland, and was a successful award winner for with EU collaborations, exhibitions and publications during her tenure as SSA, Society of Scottish Artists President. As an established visual artists based initially in Glasgow, and now in Dundee, she also has a background in creative arts facilitation having worked with Angus Council and with Ginkgo Projects-  a leading UK arts consultancy where she collaborated on creative engagement programmes for new-build schools which led to a range of creative interventions within school campus reflecting Curriculum for Excellence strategies. In parallel with her international arts networks she was a key contributor to higher education international networks with GIDE Group for International Design Education in Dundee in 2012.